17-year old Rajae Hinds, a fifth form student from Greater Portmore High, has emerged winner of the Boys Can Summer Competition for his original song Coping with COVID-19. The competition took place under the Boys Can Mentoring Programme, an initiative delivered by the British Council in partnership with the Grace and Staff Community Development Foundation, which provides support and encouragement for Jamaican boys completing their secondary education.

Rajae was one of three students from Greater Portmore High who took the top prizes at the competition’s hybrid virtual/face-to-face awards ceremony, hosted at the GraceKennedy/Parade Gardens STEM Centre in Downtown Kingston on August 25, 2020. Marjaalaine Francis of the Grace and Staff Community Development Foundation led the event which observed COVID-19 health and safety protocols, and hosted awardees, their guardians, and guidance counsellors from Spanish Town and Greater Portmore High only. All other participants joined online.

In her opening remarks Tanketa Chance Wilson, General Manager of the Grace and Staff Foundation, expressed appreciation for all who had made the competition possible and commended the boys who participated: “You have shown such great strength and commitment [and] that you are indeed resilient. I implore you to continue exercising your creativity and using your talents for good,” she said.

Lauren Fiszzon, British Council Jamaica’s Education Project Manager for the programme also congratulated the participants: “This programme is very important to us at the British Council and we celebrate and applaud your achievements. You have shown resourcefulness and creativity […] in the entries you have submitted,” she said.

Second place in the competition was awarded to a fourth former from Greater Portmore High, 14-year-old Newton Jackson, for his story The Twin, and 16-year-old Ricquan Chambers took third place for his song Quarantine. Kimoy Jackson and Akil Tucker, also from Greater Portmore High, and Tajay Tapper, a student of Spanish Town High, earned special commendations for their entries. 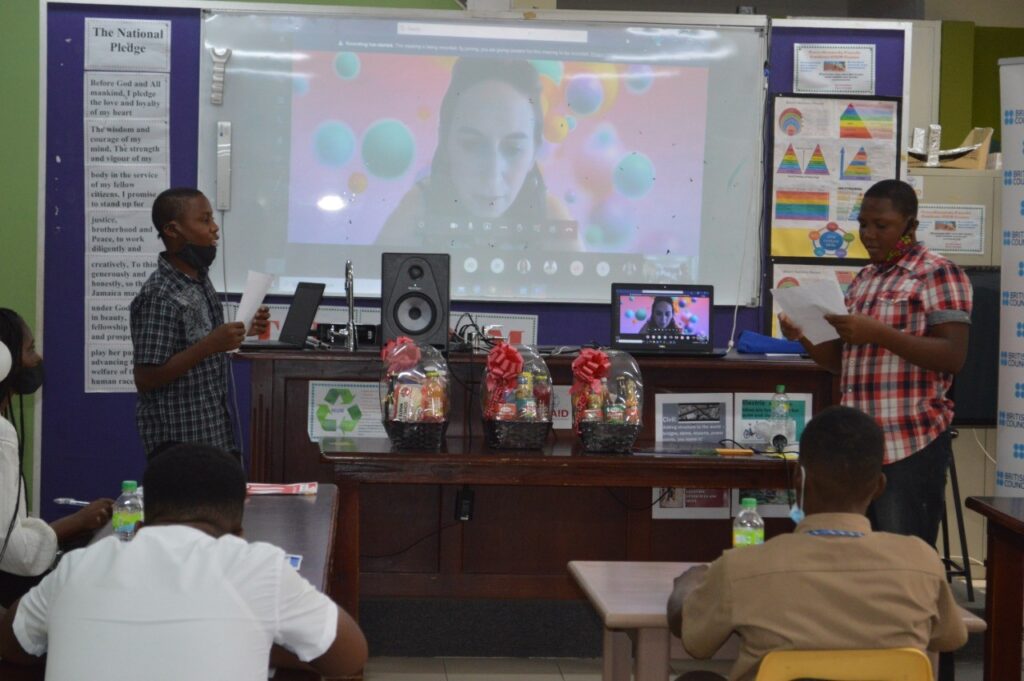 Newton Jackson (right), student of Greater Portmore High and who placed second in the Boys Can Summer Competition reads his winning entry entitled The Twin with his brother, Kimoy (left) at the competition award ceremony at GraceKennedy/Parade Garden STEM Centre in Downtown Kingston on August 25, 2020. Lauren Fiszzon, British Council’s Education Project Manager for Jamaica who joined virtually for the ceremony is onscreen.

Held under the theme Be Resilient!, the inaugural staging of the Boys Can Summer Competition provided opportunities for participants in the Boys’ Can Mentoring Programme to channel their inner creativity and express how they are coping with the COVID-19 Pandemic. Participants submitted a variety of creative entries including songs, poetry, and stories. Judges for the Competition included representatives from the British Council and Grace and Staff Foundation, Verrol Blake, a mentor for the Boys Can Programme, and Fabian Thomas, Training Facilitator at Sankofa Arts & Facilitation. Prizes included book vouchers provided by the British Council and Grace gift baskets for the three winning entries.

The competition was inspired by a series of Boys Can online sessions held in June 2020 which focused on building resilience in the face of challenges such as how to continue studies during the COVID-19 pandemic, despite the closure of schools. Ms Fiszzon explained that the virtual sessions provided an outlet for the boys to talk about such challenges and an opportunity to equip them with the tools needed to address them.

About the Boys Can Mentoring Programme
The Boys Can Mentoring Programme was launched in May 2019 as a partnership between British Council and Grace & Staff Community Development Foundation and targets Jamaican boys, ranging in ages from 12 to 16 years. The Programme uses strategies aimed at improving learning, motivation and engagement in schooling and consequently to improve levels of academic achievement, raise personal expectations and ambitions. The programme currently hosts 46 boys from seven high schools – Spot Valley High, Foga Road, Denbigh, Spanish Town, Tivoli, Maldon and Greater Portmore – who receive guidance from 20 mentors from across multiple career disciplines. Since its launch participants, mentors, guidance counsellors and parents have engaged in activities focused on career development, solutions-focussed sessions for developing skills such as emotional intelligence, conflict management, communication, resilience and problem-solving skills. Mentoring training sessions have formed part of the programme (including training in child protection) as well as parent empowerment sessions.

About Grace & Staff Community Development Foundation
Grace and Staff Community Development Foundation is the outreach arm of GraceKennedy Limited. It was established in 1979 in response to the social and economic conditions existing in inner city communities. It is a joint project between management and staff, to facilitate the development of communities that border GraceKennedy’s offices.

About the British Council
The British Council is the UK’s international organisation for cultural relations and educational opportunities. We build connections, understanding and trust between people in the UK and other countries through arts and culture, education and the English language. Last year we reached over 80 million people directly and 791 million people overall including online, and through broadcasts and publications.

Founded in 1934 we are a UK charity governed by Royal Charter and a UK public body. We receive a 15 per cent core funding grant from the UK government.

To see the Boys’ entries and get more information on the Summer Competition 2020 please visit: https://caribbean.britishcouncil.org/boys-can-summer-competition-winners

We use cookies to ensure that we give you the best experience on our website. If you continue to use this site we will assume that you are happy with it.Ok