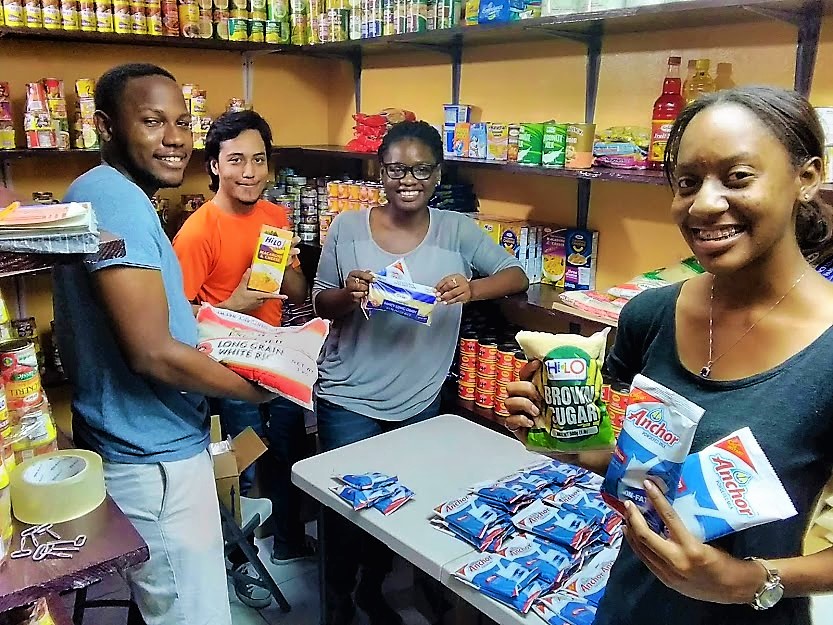 Just in time for the new school year, the GraceKennedy Foundation has spearheaded additional improvements to a food bank programme, which will assist financially challenged tertiary level students to meet their nutritional needs under the campaign dubbed “Feed the Future.”

The programme, known as the “GK Campus Connect Food Bank,” was established in April 2019, at the Mona Campus of The University of the West Indies (UWI). The brainchild of Norval Mendez and Claudine Reid, the “GK Campus Connect Food Bank” is a collaborative effort spanning both UWI and the University of Technology Jamaica (UTech).  It started with Norval and Claudine who, as UWI undergraduates, were providing small food packages to needy students under the “Hands Across the Hall Action Project”.  However, due to the overwhelming demand, Norval and Claudine soon realized that the need was greater than their means. They decided to approach GraceKennedy with a proposal to implement the project on a larger scale.

In 2018, the Foundation agreed to partner with the Hands Across the Hall Action Project, the UWI Guild of Students, the UWI’s Office of Student Services and UTech’s Financial Aid Office to establish the Food Bank.

“From the get-go, we were interested. The GraceKennedy Foundation has traditionally assisted students in the form of scholarships which usually goes towards covering the cost of tuition, transportation, and some educational supplies. But what we have seen is that many university students are hard-pressed to find food after covering those costs and they sacrifice eating to remain registered in university.  Even if they are on a scholarship, what they receive does not always stretch far enough to cover meals,” said Caroline Mahfood, Executive Director of the GraceKennedy Foundation.

She explained that the Foundation leveraged the strength of the GK Group, particularly its foods division, GraceKennedy Foods, which committed food items valued at $1 million. In addition, the GraceKennedy factories -Dairy Industries Jamaica Limited (DIJL) and Grace Food Processors (Canning) are donating items monthly, and its supermarket chain, Hi-Lo Food Stores, has directed all donations for its ‘Cans For A Cause Initiative’ at its Liguanea branch to the Food Bank.

Since it was launched in April, the initiative has provided approximately 102 students at the UWI Mona and UTech with packages of non-perishable food items every two weeks.

“We can’t say enough how important this initiative is. Up to this point, we have made a significant impact, but we realised we definitely need to do more for the new school year. We always talk about the fact that hungry children cannot learn, but we’re usually referring to those in early childhood education. The same is true for some students attending university.  They too need all the help we can provide to change that. We’re really grateful to those who have contributed to the Food Bank, from our GK subsidiaries, to our Hi-Lo customers. We ask them for their continued support, which could literally be the difference between success and failure for the upcoming school year,” Mrs Mahfood added.

Among the improvements Mrs Mahfood pointed out is the addition of a second food bank, located at UTech’s Papine campus.  This second food bank, she said, occupies even more square footage than the first one located UWI’s Mona Campus which was made available to the programme by the UWI’s Guild of Students.

Another major improvement is the widening of the collection points through Hi-Lo Food Stores, where donors can hand in their contribution of non-perishable food items.  Mrs Mahfood explained, “The feedback from our customers was that this is a great initiative, and some suggested that we include other Hi-Lo stores in the programme.  Hi-Lo has wholeheartedly agreed to this, and the addition of more collection points will mean that more of our volunteers can spread out across the various locations to assist with the promotion of the Food Bank, thereby garnering even greater support.”

Another exciting new aspect of the programme will enable Jamaicans living abroad, many of them who graduated from local universities, to become involved in making their contribution.  Known as the “Good Graces Barrel”, Jamaicans overseas can contribute US$50 to fill a barrel with Grace products through Sampars online shopping platform at www.shopsampars.com.

Norval is now formally employed as the Food Bank Co-ordinator and he is tasked with supervising the student volunteers associated with the programme, as well as streamlining the transporting of donations from collection points to the Food Bank.

Mrs Mahfood expressed the hope that the Food Bank will continue to expand and that eventually it will include students attending other universities.

Students interested in benefiting from the Food Bank must be approved by the UWI’s Office of Student Services or UTech’s Financial Aid Office. To find out more go to https://ccfoodbank.com or call 876-838-6974.