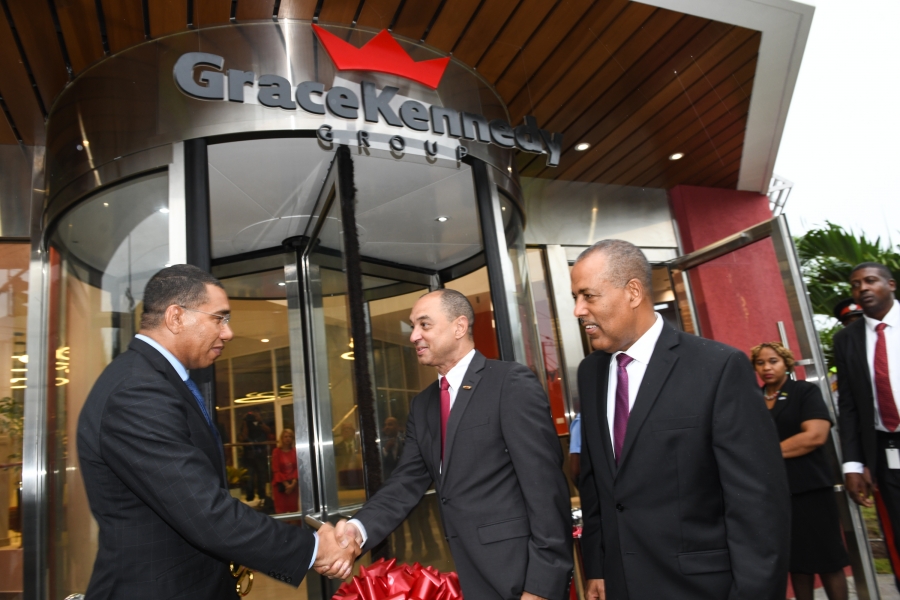 After approximately two and a half years of construction, GraceKennedy Limited’s new Headquarters at 42-56 Harbour Street, is now complete. Representing an investment of over J$3.2 billion, the building was opened by Prime Minister Andrew Holness during a short ceremony held on May 29, 2019.

GraceKennedy Has a New HQ! – Honourable Prime Minister Andrew Holness congratulates GraceKennedy Limited’s (GKL) Group Chief Executive Officer, Senator Don Wehby (centre), on the occasion of the opening of the Company’s new headquarters on 29th May 2019. Sharing the proud moment is GKL’s Board Chairman, Professor Gordon Shirley. The new headquarters is located at 42 – 56 Harbour Street in downtown Kingston. The Honourable Prime Minister gave the keynote address at the opening ceremony.

That ceremony followed the Company’s AGM, held in the new location, fulfilling a promise made by Group CEO Don Wehby at the Company’s Annual General Meeting in 2018.

Prime Minister Holness cut the ribbon to indicate the building’s official opening, and was taken on a brief building tour before the ceremony began.

Addressing the gathering, Mr Wehby spoke proudly of the new headquarters. “This building is so much more than a physical structure. It is really a manifestation of the vision of generations of GraceKennedy leaders, many of whom are with us here today. It shows where GraceKennedy is coming from, and a demonstration of the commitment we made in 1922 that downtown Kingston would always be our home. It shows where GraceKennedy is 97 years later, and where we are headed on our journey to becoming a Global Consumer Group.”

Isn’t This a Beautiful Building? GraceKennedy Limited’s Group CEO Senator Don Wehby (centre), smiles happily as he listens to His Worship Senator Councilor Delroy Williams, Mayor of Kingston & St. Andrew at the Company’s new headquarters on May 29, 2019. Sharing the happy moment is GKL’s Board Chairman, Professor Gordon Shirley. They were in the lobby of the new building after a ribbon cutting ceremony to symbolise its opening.

The Group CEO spoke to the many partnerships which led to the completion of the new building, and paid tribute to the GraceKennedy leaders, past and present who followed their dream of investing in Jamaica. “We engaged some of Jamaica’s best, along with some of the world’s best. Then we teamed up, very importantly, with the community, to make this dream a reality.” Mr Wehby pointed out that over 150 Jamaicans from communities in downtown Kingston worked on the construction project. “What you are seeing here is a product of Jamaican hands from this community, building the GraceKennedy building. That’s what you are seeing. And you know what I found amazing. That when Jamaicans are given the opportunity, they work hard.”

Prime Minister Holness in his remarks as the Guest Speaker, praised GraceKennedy for its commitment to Jamaica and urged other companies and their boards to follow the example set by GK in investing in the nation. “We want more boards to sit down and on behalf of their shareholders, take the calculated risk of making even greater investments in Jamaica.” He noted that the community had benefited from the private decision of the shareholders and directors through the creation of jobs, and GraceKennedy would reap even more dividends from that as the community would see it as “their building, thereby protecting it.”

PM Tours GraceKennedy’s New HQ! Prime Minister Andrew Holness looks on in appreciation as he tours GraceKennedy Limited’s (GKL) new headquarters, located at 42 – 56 Harbour Street in downtown Kingston. Accompanying him on the tour (from left) are GKL’s Board Chairman, Professor Gordon Shirley; Senator Don Wehby, GKL’s Group CEO; and Senator Robert Morgan, Parliamentary Secretary. The occasion was the opening ceremony of GraceKennedy new headquarters on May 29, 2019. The Prime Minister delivered the keynote address at the event.

Also speaking at the event was Marcus Foster, a resident of Southside in Central Kingston and a former beneficiary of Grace & Staff Community Development Foundation, who was among the 150 residents from downtown Kingston involved in the construction. He said that working on the site had made a big difference in his life, as well as others in the community. “The Grace site was a big learning for me. I started out as a labourer and by the time the building went up I was doing carpentry, steel work, and was making all the stirrups for this building. I learnt a lot from the Grace site that will stay with me for life. Working on this building now makes me a part of Jamaica’s history.” He thanked GraceKennedy for its investment in him and other young persons from downtown Kingston, and ended his remarks by saying, “I hope that other companies will inspire young people the way GraceKennedy has inspired me.”

With the opening of the new headquarters, this brings to five the number of buildings occupied by GraceKennedy along the Kingston waterfront. Of the five, the building located at 64 Harbour Street housed the Company’s operations when it started in 1922. The building at 73 to 75 Harbour Street will now serve as the Headquarters for the Food Division’s domestic operations.

The new Headquarters is ten stories high and occupies 192,000 square feet. It brings together the Group’s Executive Office, the GK Financial Group Divisional office and the GK Money Services Group. There are boardrooms, open collaboration spaces, a training facility, an innovation lab. Additionally, the new building houses a Hi-Lo Express as well as retail spaces for non-GK entities. It also features an 11-level parking garage which can accommodate just over 400 vehicles.

In keeping with its commitments towards contributing to the nation’s sustainable development, GraceKennedy’s new HQ boasts several environmentally friendly features. These include solar energy panels which will provide 30 per cent of its power supply, and a rain water collection system which be used for landscaping needs and other purposes.