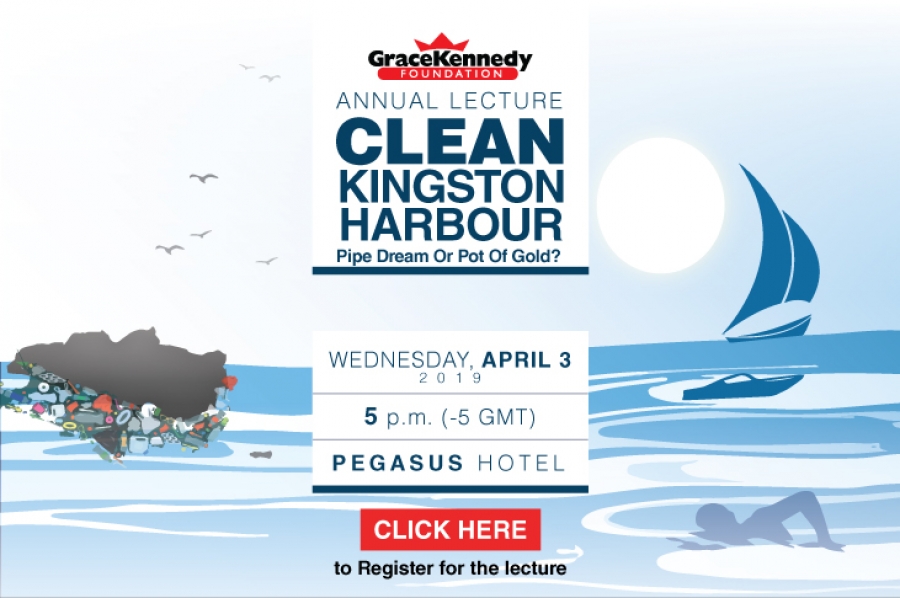 “Downtown Kingston has been our home for 97 years, and the Kingston Harbour is literally in our backyard. GraceKennedy has a vested interest in seeing this area fulfill its potential. We are therefore very concerned about how polluted the Harbour is and the long term damage being caused to the mangroves and esthetics of the area. The lecture will explore the environmental and economic benefits of having a clean harbour and the role the youth will have to play in seeing this become a reality,” said GraceKennedy Foundation’s Executive Director, Caroline Mahfood.

While the lecture usually features one speaker, this year, the format will change, taking the shape of more of a panel discussion. Three speakers will be featured – Professor Mona Webber Director, Centre for Marine Sciences, The University of the West Indies (UWI), Mona Campus; Dr Wayne Henry, Director General, Planning Institute of Jamaica (PIOJ), and Mr Tijani Christian, Chairperson, Commonwealth Youth Council. The moderator will be Professor Dale Webber, Principal of the Mona Campus, UWI.

Prof. Mona Webber, the GraceKennedy/James Moss-Solomon Snr. Chair in Environmental Management, is a marine biologist and ecologist with over 25 years of experience in teaching and research. As the head of the Port Royal and Discovery Bay Marine Labs and the Centre for Marine Sciences, UWI, Prof. Webber’s expertise on mangrove habitats, micro plastics, zooplankton and marine life will provide the environmental expertise needed for this discussion.

Dr Wayne Henry assumed duties as Chairman & Director General of the PIOJ in 2016. Prior to joining the PIOJ, he spent five years as the Vice President, Government Affairs, Scotiabank Group, served as Chief Technical Advisor to the Minister of Finance, as well as Special Advisor to the Minister of Agriculture. He previously worked as the World Bank Representative in Jamaica, and spent several years as a Lecturer in Economics at UWI. In his leadership role at the PIOJ, Dr Henry will offer great insight into the economic, social and environmental issues to achieve the sustainable development goals for downtown Kingston.

Tijani Christian serves as a voice for youth and youth development anywhere in the world he goes, capturing audiences with his compassionate and warm persona. He has served as the former Youth Ambassador of Jamaica to the Commonwealth, One Young World Ambassador, Member of the CARICOM Single Market & Economy (CSME) Spokesperson Bureau, Immediate Past Chairperson of the Caribbean Regional Youth Council (with an oversight of 16 Caribbean countries). Most recently, Tijani was elected as the Chairperson of the Commonwealth Youth Council at the Commonwealth Youth Forum and Commonwealth Heads of Government Meeting in London in April 2018. Tijani is the first Jamaican and Caribbean national to be elected to this post to officially represent 1.2 billion young people from 53 countries all over the world. Tijani’s youth perspective will play an important role in the lecture presentation.

“We believe that GraceKennedy, as one of the largest private sector entities in the Caribbean, can help to pull together key government agencies, the private sector and citizens to drive this effort. With the opening of GK’s new Headquarters, I think the timing for this discussion is right on target. A vibrant economy within the downtown Kingston area could in the long run reduce crime and violence, improve the prospects for businesses and enhance the aesthetic appeal, thus contributing to the overall impact of attracting more locals and tourists to the nation’s capital and importantly, assist us in propelling sustainable development in Jamaica,” Mrs Mahfood said.

The lecture is free to the public. Persons interested in attending can register online at https://gkflecture2019.eventbrite.com/. The Lecture will also be streamed live at https://www.youtube.com/watch?v=9jC3z8mJcuw.