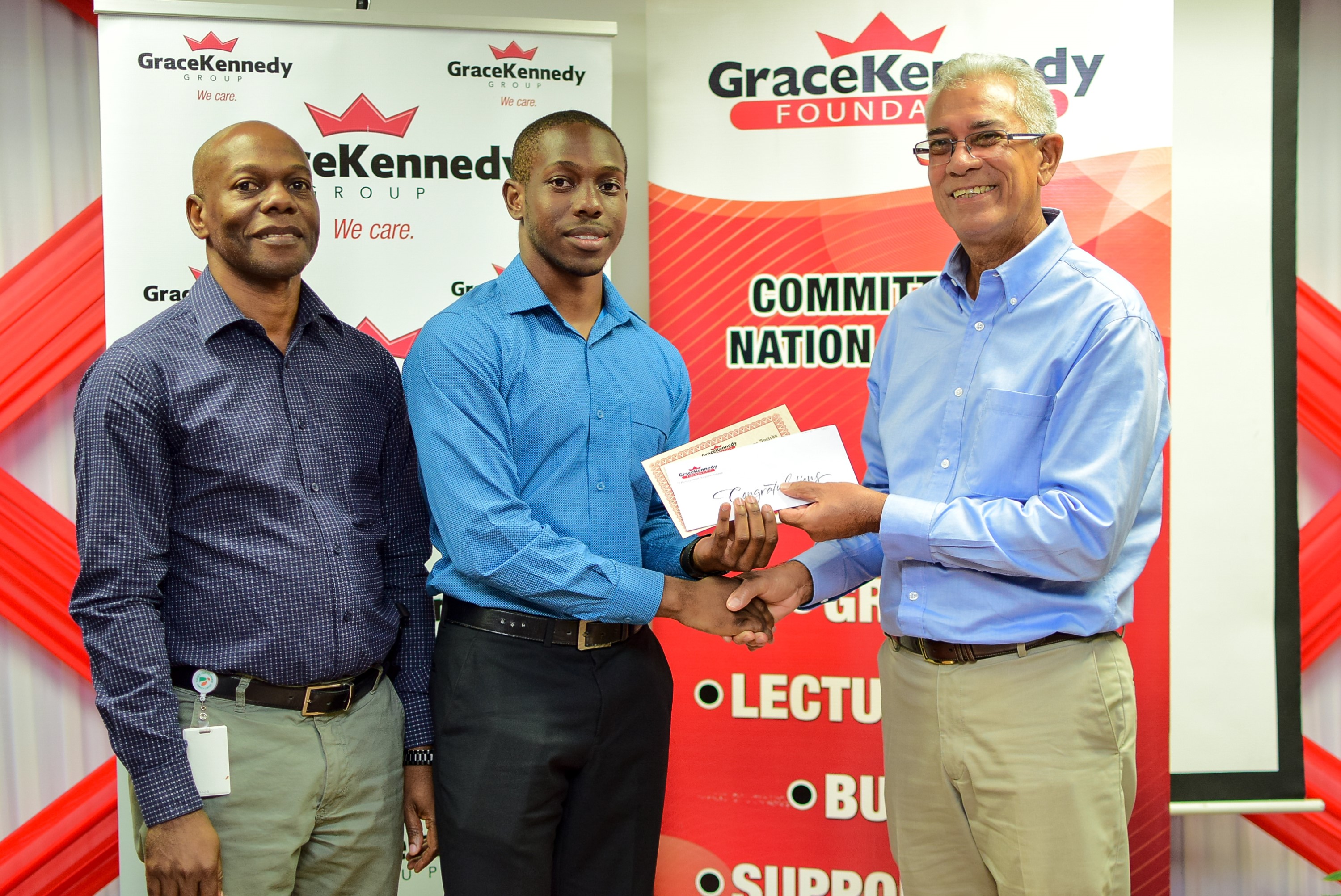 Excellence never goes unrewarded! This was certainly the case at the 29th anniversary of the annual Carlton Alexander Memorial Bursary Awards Ceremony held on August 26, 2019 at GraceKennedy’s Harbour Street offices in downtown Kingston.

During the short ceremony, 18 brilliant children of GraceKennedy employees received academic bursaries valued at a total of $1.2 million, in recognition of achieving excellent grades, being very involved in extra-curricular activities and providing leadership to others during the 2018/2019 school year.

Bursaries were awarded to secondary and tertiary level students, some of whom will be attending high school or university for the first time this September. Recipients from grades seven to 11 received $60,000 each, while those in sixth form got $80,000 for each of their two years, and those attending tertiary-level institutions receiving $100,000 each.

In giving her report on the Bursary Programme for the 2019 academic year, Executive Director of the GraceKennedy Foundation, Caroline Mahfood, congratulated the students whom she said, continued to make their parents and GraceKennedy proud.  She highlighted the outstanding results of Gabrielle Findlay of Wolmer’s High School for Girls who earned nine Grade 1 in her CSEC exams, and Kahlil Walker of Manchester High, who received six Grade 1 in his CAPE Unit one exams. Mrs Mahfood used the opportunity to highlight the hard work of the students, some of whose bursaries were being renewed because of the high standards they had met.  Having received an initial bursary through the Foundation, students are eligible to continue receiving the benefit as long as they maintain a minimum average of a B or its equivalent.

Guest Speaker at the event, Wayne Robinson, Acting Principal of Jamaica College shared with the students that in order to succeed, they must be mindful of the ‘three Rs’.  He told the students to make time to review the day’s lesson on that day; repeatedly practise what they learn in order to become very good at what they do, and to read ahead in preparation for what is to come.

In joining the other speakers in acknowledging the outstanding achievement of the bursary recipients, Simone Clarke-Cooper, who represented Group CEO Don Wehby at the event, also praised the parents for their role in the children’s success. She said, “Today, we recognise and celebrate the awardees of this bursary. We also want to acknowledge the parents of the awardees, and let you know that WE know what you do, day in and day out, not only to contribute to GraceKennedy, but to contribute to the achievement of your children. Many of you in this room have ‘gone back to school’ several times. You’ve sat PEP, you’ve sat end of term exams, you’ve done CSEC and CAPE. We know. And we salute you. We know it’s challenging. But as you sit here today, you can say, it’s worth it.”

The bursaries are named in honour of the late Carlton Alexander, former iconic Chairman and CEO of GraceKennedy. Well-known for his hard work and business acumen as well as his philanthropy, Alexander started at GK as a stock clerk. He is credited for saying, “Values motivate people to work hard; they develop commitment and create the will to use every opportunity which is offered to us.”

Following Mr Alexander’s passing in 1989, GKL established the Carlton Alexander Memorial Fund.  This provides funding for this bursary programme, an annual scholarship, awarded to a graduate of Jamaica College, and the endowment of the Carlton Alexander Chair in Business Management at The University of the West Indies (UWI).

Established in 1982, GraceKennedy Foundation has as its aim, to be a world-class corporate foundation committed to the wellbeing of individuals and communities by creating environmentally sustainable programmes, promoting healthy lifestyles and increasing access to education.